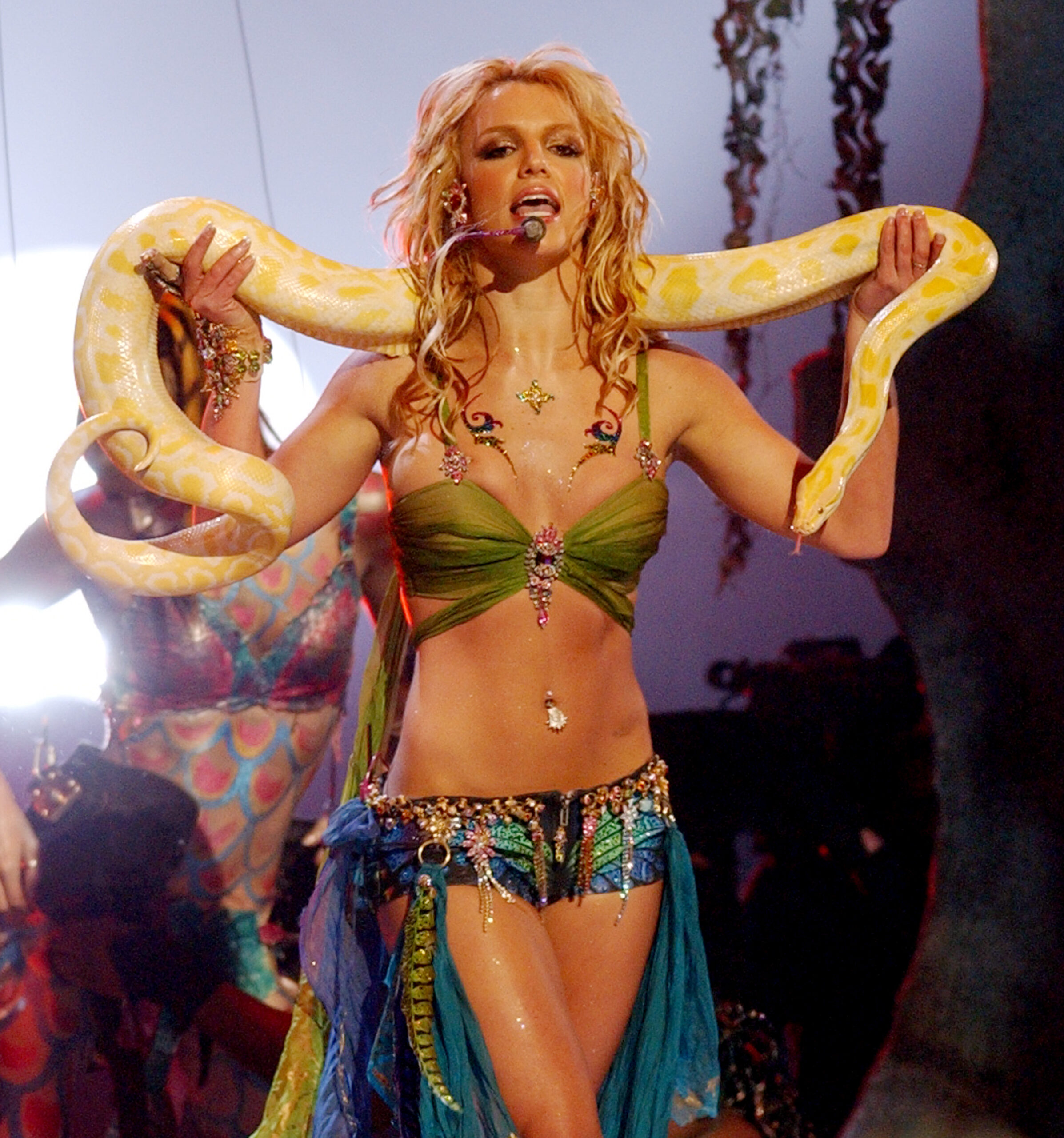 On September 06, 2001, Britney Spears changed the course of pop history when she performed ‘I’m A Slave 4 U’ at the 2001 MTV VMA Awards whilst dancing on stage with an albino Burmese python. Twenty years later, on the anniversary of the performance, it remains one of the most iconic moments in music history and a legacy that will forever remain part of pop culture. Responsible for creating the performance was STUFISH Entertainment Architects, who were the creative and production design team hired specifically to work with Britney Spears.

STUFISH began work on the ambitious project on 17 August 2001, three weeks ahead of the performance at New York’s Metropolitan Opera House. Based upon Britney’s then new single ‘I’m A Slave 4 U’, the concept of the performance followed the themes of captivity, temptation, and sexuality. The revolving cages, in which Britney appeared alongside a live tiger, represented the idea of entrapment while the association of the snake and tree symbolizes temptation in the story of Adam & Eve, where Britney was presented as an Amazonian, Eve-like figure. 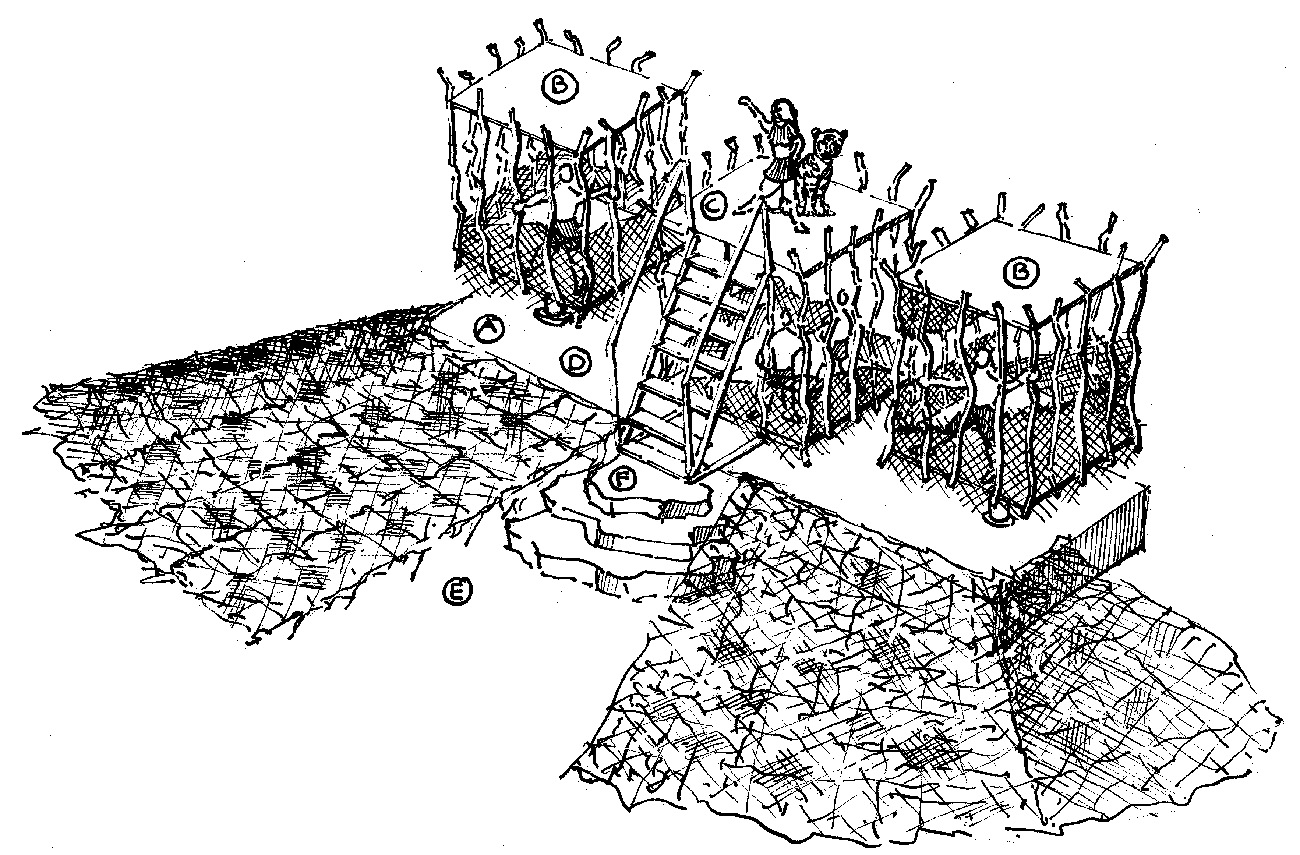 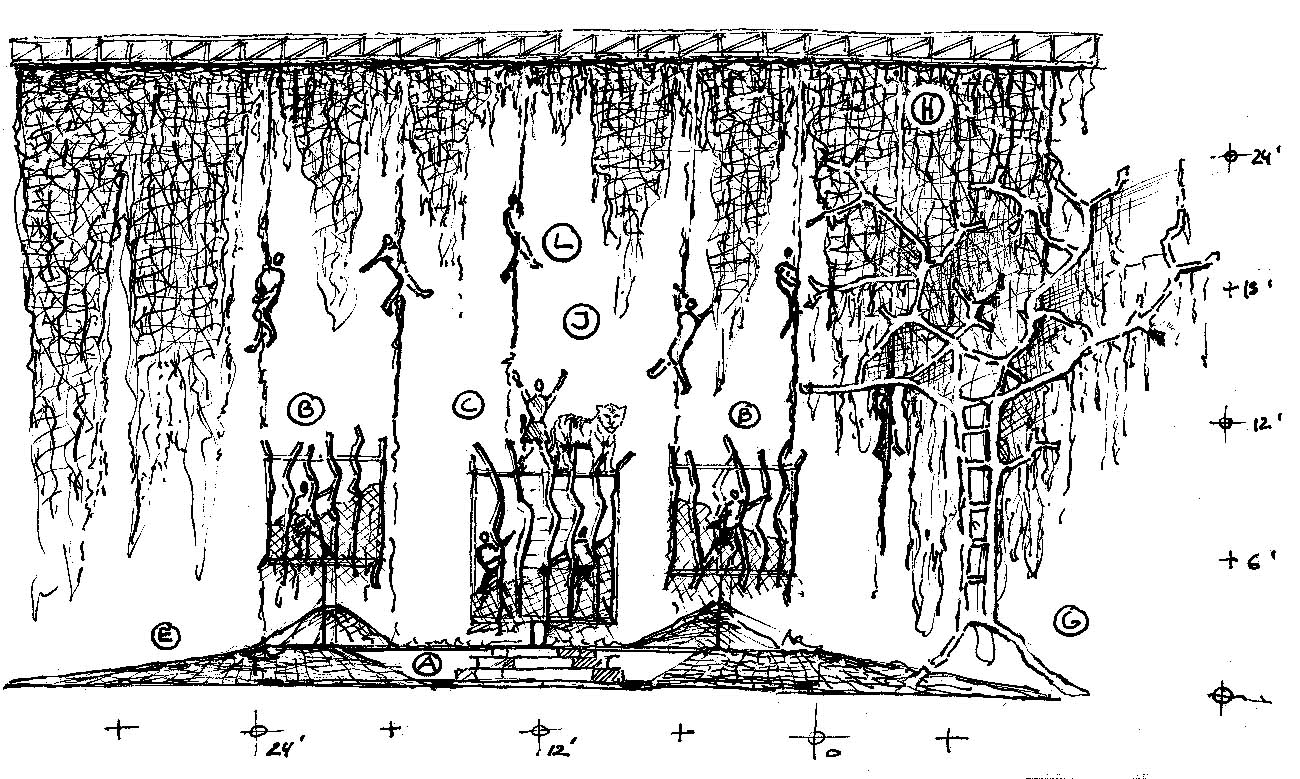 "Britney Spears was heavily involved in the creative process throughout and used her experience as a world-class entertainer to deliver one of the greatest live performances in music history”. 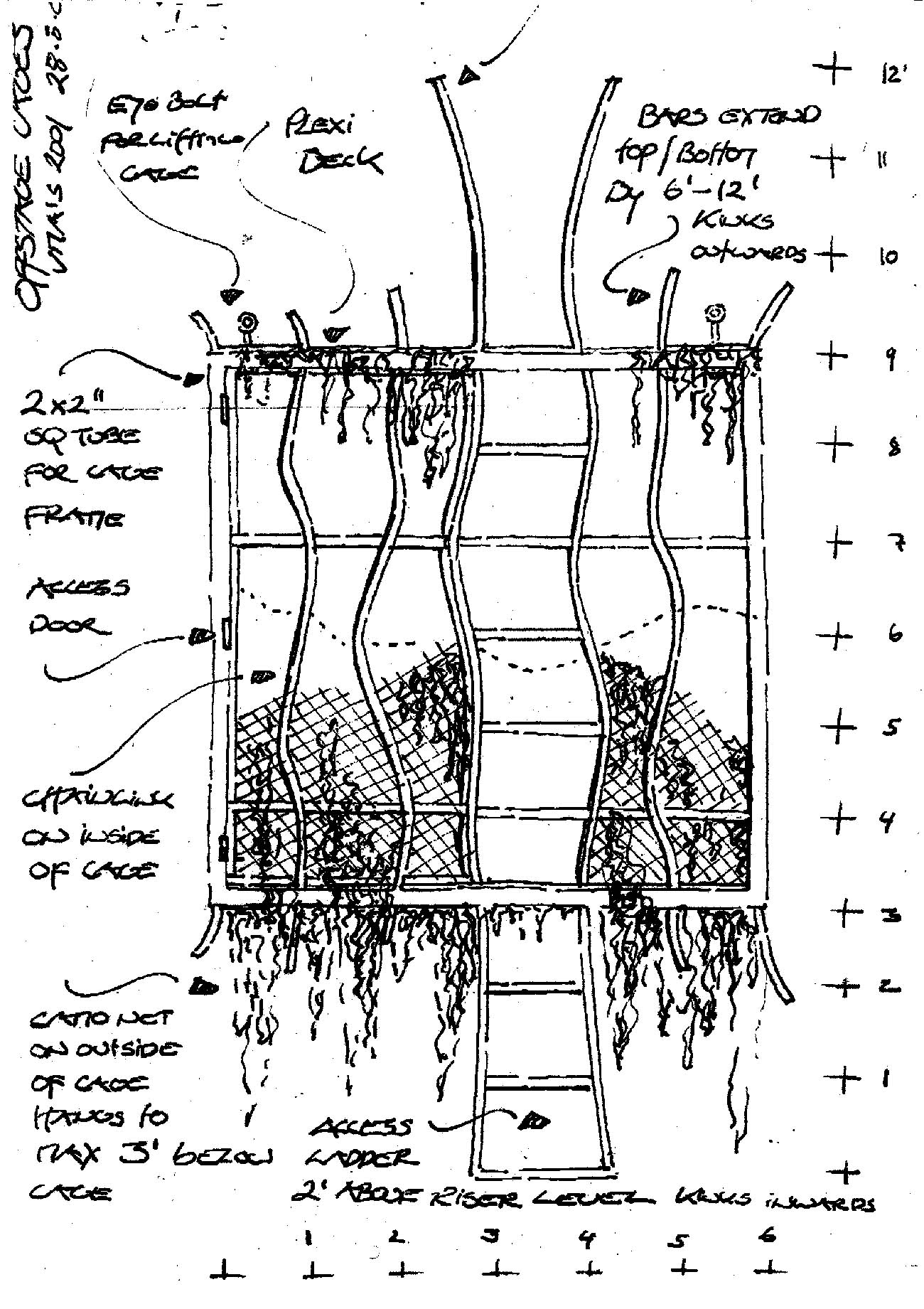 The conceptual process of the stage design had a high level of abstraction and, instead of mimicking the natural world, STUFISH created a natural world rendered in a highly stylised fashion, using the dominant colours gold, silver and bronze, which reflected the light beautifully across the stage. The limited technological capacity of video screens at that time meant no video content could be played across vast video screens in the background, which is the norm in today’s pop performances. Instead, a black velvet star cloth with lights was used to give audiences the illusion that they were staring into infinity. To pull off the show stopping performance, STUFISH created two stages for the event, including a mock-up version for Britney to rehearse separately in a studio prior to the VMA’s. 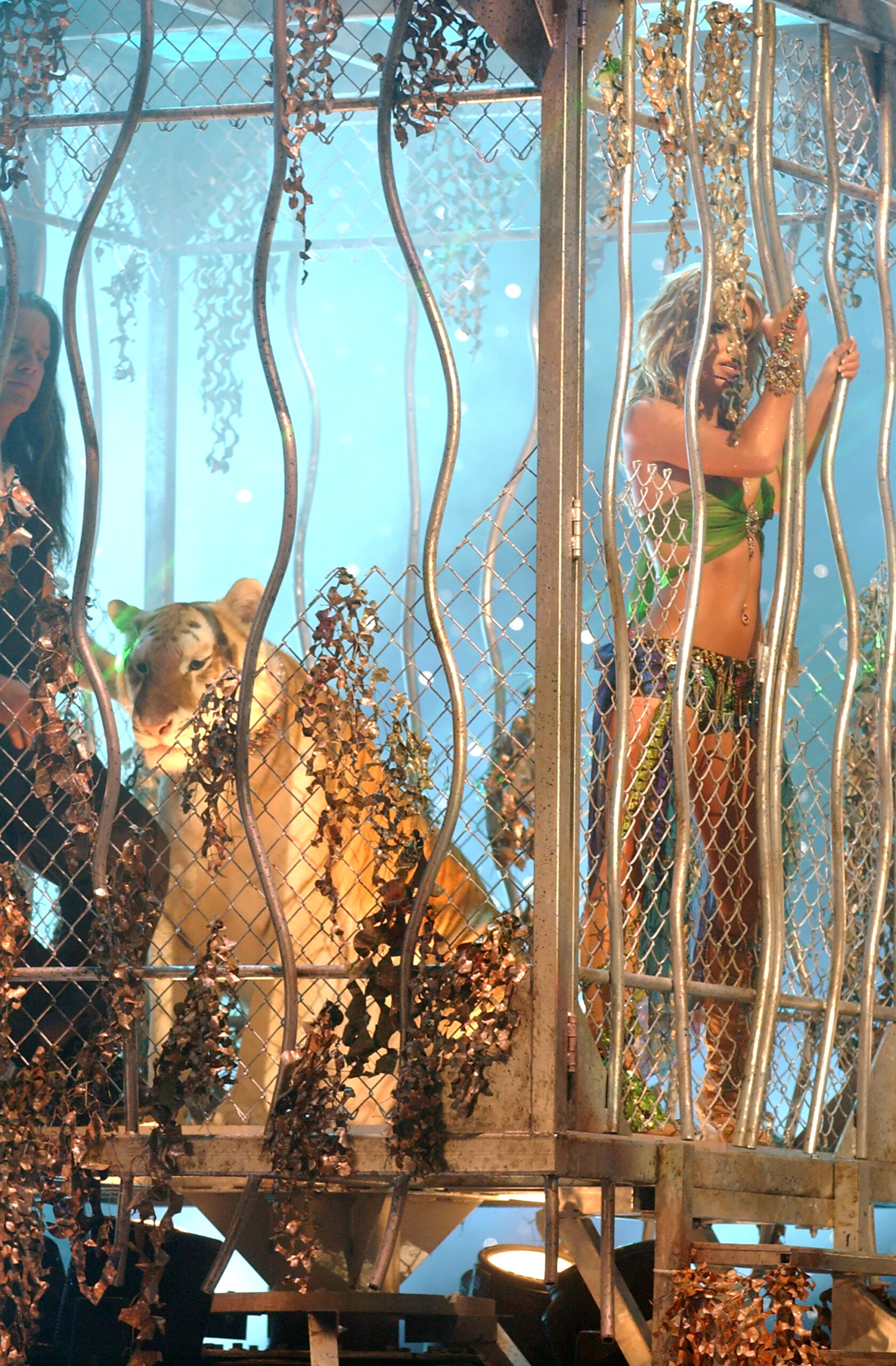 To pull off such an extravagant production, STUFISH considered many detailed elements to bring the performance to life, including the cage where Britney first appeared onstage. The latch to the cage was specifically designed to allow Britney to open it easily, whilst keeping the tiger contained and the bars were carefully placed to frame Britney’s face, without casting any shadows. The stairs onto the main stage from the cage were designed with Britney’s shoes in consideration, to allow the pop superstar to descend whilst concentrating on the camera and not where her next foot went. Objects and props became very important to the performance, which acted as a focal point and dictated the scale of the set during the creative process.