The Vertical Theatre is a new kind of performance space that could be used by all levels of the live entertainment world – from theatre and festivals to global artist tours as well as comedy, circus, and televised events ensuring that the world of live entertainment can thrive in a world reeling from the unprecedented impact of a global pandemic.

This freestanding tourable structure, has a roof to protect the audience and stage from the elements, with optional open sides to allow for optimum airflow and natural ventilation. The audience sits in balconies which can accommodate groups between 4-12 people or designated ‘social bubbles’. Each audience member has an up-close view of the performance space and enjoys a unique VIP experience, bringing more people closer to the artist unlike any other venue. The Vertical Theatre is modular in size and has the capacity for 1200 – 2400 people (depending on social distancing rules). The venue has the capability to include built-in global streaming capacity and features innovative F&B facilities. Conceived with social distancing and decentralisation of audiences in mind, the Vertical Theatre also creates a space that is fully adaptable for when Covid-19 restrictions are a thing of the past.

In August 2020, led by STUFISH Entertainment Architects, a group of producers, creatives and technical specialists gathered to work towards a new design of venues that would guarantee the future of live performance now and in the future. The Vertical Theatre Group founders are STUFISH Entertainment Architects represented by Ric Lipson and Paul Preston; Holly Gilliam, Live Events and Documentary Producer; Katy Lipson, Theatre Producer; Jake Berry, Production Director; Robert Delamere, Director and Digital Theatre Founder. Their main goal was to provide a commercially viable space for live entertainment now, in a world of social distancing.

The Vertical Theatre Group founders, commented: “We are devoted to the vital importance of arts and culture. We believe they are an essential part of human experience, of what makes us who we are. We are very excited to be able to bring this innovative new venue offering to the live entertainment world at this pivotal moment for the future of the arts.’’

Ric Lipson, Entertainment Architect and partner at Stufish, commented: “Creativity defines all the artists and partners we work with. At Stufish, we were excited to see what a new type of cross arts collaboration could produce, as we build a new vision for the future of live entertainment – The Vertical Theatre.”

As market leaders in their own right, Stufish have been uniquely placed to lead this innovative opportunity to explore the possibilities of live performance with their world-leading live entertainment touring designs with artists such as Beyoncé, U2, Madonna, Rolling Stones, Elton John, Monty Python, and Queen + Adam Lambert, as well as permanent theatres in China. 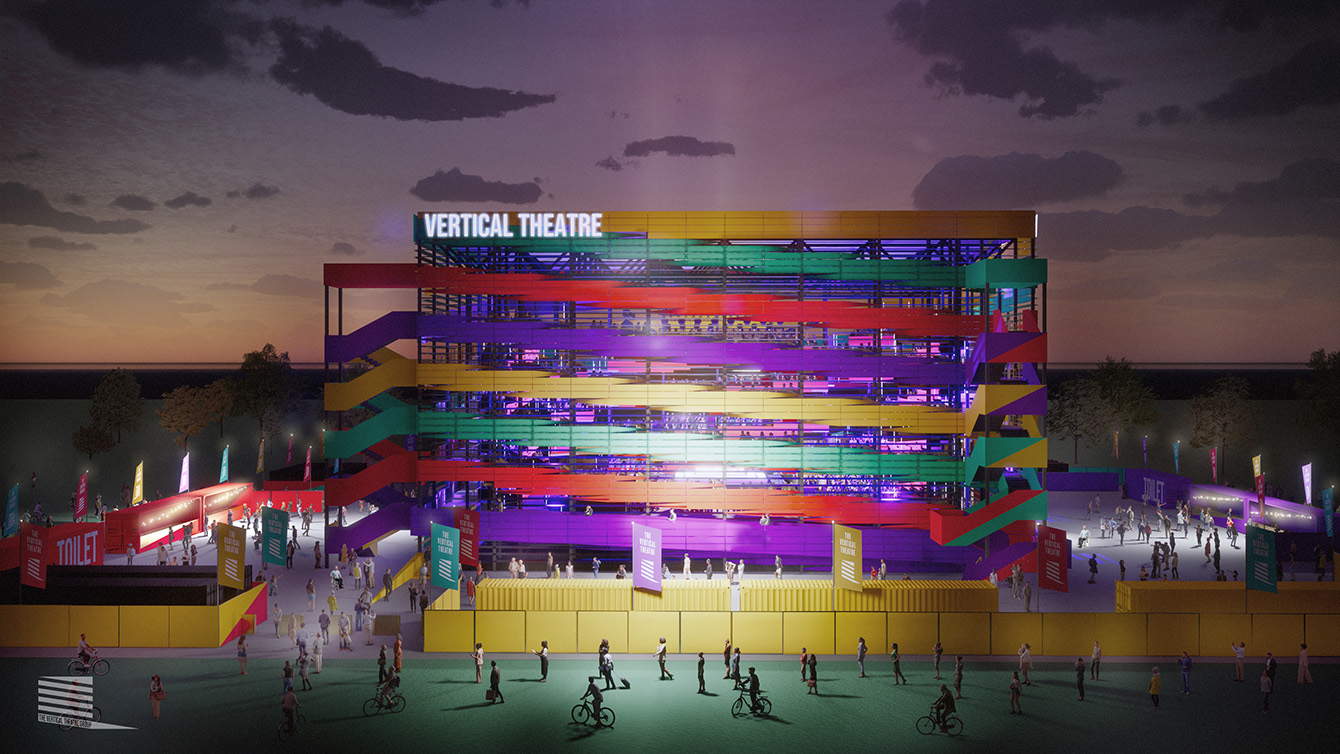 About The Vertical Theatre Group

The Vertical Theatre Group  is responsible for further developing the concept and business model for the venture, looking to partner with promoters, local councils, producers, live-streaming companies, merchandise and other commercial and creative entities. Here is a bit of information about the founders.

Founded in 1994 by the late and legendary Mark Fisher. Stufish’s projects with Pink Floyd, U2 and the Rolling Stones set a global precedent for Entertainment Architecture. Their passion and artistry are ingrained in every project they create and drives them to make the most innovative and iconic experiences in popular culture: from U2’s 360° Claw to Beyoncé and Jay-Z’s OTR II floating stage and iconic landmark buildings such as Dai Show and Han Show Theatres in China.

An award winning, independent producer whose shows include the UK premiere tour of The Addams Family Musical, 50th anniversary UK and European touring production of Hair, the European premiere of The Toxic Avenger and the revival of The Mystery Of Edwin Drood at The Arts Theatre, and critically acclaimed Off-West End productions of The Last 5 Years, Pippin, Spring Awakening, Rags, Mame and Yank amongst others. Katy founded the From Page To Stage Festival of New Musicals and has supported 100 new shows in development as well as having a slate of new projects in development.

A multiple award-winning production director,  Jake has toured the world with bands including U2, Rolling Stones, Madonna and AC/DC, and co-produced the live touring version of the BBC documentary series Walking with Dinosaurs and the Cirque du Soleil tour show The Immortal Michael Jackson, based on the music of Michael Jackson with Cirque performers.

A curator, producer, project manager & artist manager, working across film, television and live events.  Holly has curated several exhibitions about craftsmanship in film co-produced the Monty Python 2014 reunion show at the O2, London Monty Python Live (mostly) – One Down Five to Go, the live broadcast of which was nominated for a 2015 BAFTA TV Award, produced the 2015 documentary, Monty Python – The Meaning of Live, and manages the four remaining members of Monty Python and the Monty Python brand.